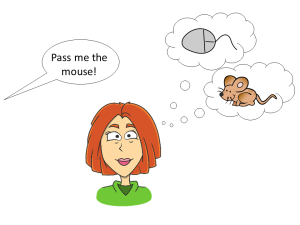 fMRI studies of how the brain processes sentences containing semantically ambiguous words have consistently implicated (i) the left inferior frontal gyrus (LIFG) and (ii) posterior regions of the left temporal lobe in processing high-ambiguity sentences. Despite the consistency of these findings there is little consensus about the precise functional contributions of these regions. This article reviews recent findings on this topic and relates them to (i) psycholinguistic theories about the underlying cognitive processes and (ii) general neuro-cognitive accounts of the relevant brain regions. We suggest that the LIFG plays a general role in the cognitive control process that are necessary to select contextually relevant meanings and to reinterpret sentences that were initially misunderstood, but it is currently unclear whether these control processes should best be characterised in terms of specific processes such as conflict resolution and controlled retrieval which are only required for high-ambiguity sentences (and not for low-ambiguity sentences), or whether its function is better characterised in terms of a more general set of ‘unification’ processes that are essential for comprehending all sentences. In contrast to the relatively rapid progress that has been made in understanding the function of the LIFG, we suggest that the contribution of the posterior temporal lobe is less well understood and future work is needed to clarify its role in speech sentence comprehension.