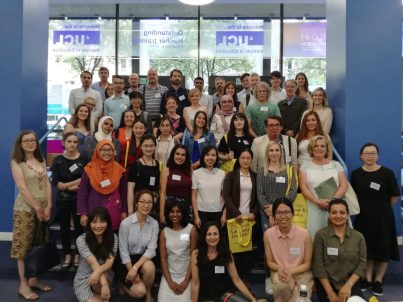 Rachael Hulme recently gave a talk at the British Association for Applied Linguistics–Vocabulary Special Interest Group (BAAL Vocab SIG) conference that took place 9-10 July 2018 at the UCL Institute of Education in London. She was awarded a prize for the joint best student presentation. The title and abstract of the talk can be found below:

Abstract: Adults often learn new meanings for familiar words, for example due to language evolving with changes in technology (e.g., the internet-related meaning of “troll”), or when learning a new subject/activity (e.g., the sailing term “boom”). The present studies use a naturalistic web-based story-reading paradigm to examine adults’ incidental acquisition and long-term retention of novel, artificial meanings for familiar words. Our previous research on this topic found remarkably little forgetting of word meanings between immediate tests and delayed tests one day or even one week after training.
Experiment 1 investigated whether testing participants immediately after training contributed to this good long-term retention, and whether this ‘testing effect’ differs between incidental and intentional learning. Participants (N=99) learned new meanings for existing words incidentally through story reading, and intentionally through a definition learning task. They were then tested immediately (without feedback) on half the items. After 24 hours, memory was better for items that had been tested immediately compared with those that had not. This testing effect was non-significantly larger for incidental than intentional learning.
Experiment 2 compared two methods of immediate test: cued recall and recognition. Participants (N=98) learned new meanings for familiar words incidentally through reading stories, and were tested immediately on half the items with either a cued recall or recognition test. They were tested on all items 24 hours later using both test methods. Memory was better for items that were previously tested using either method than for those that had not been tested; the difference was non-significantly larger for the recognition test. The testing effect also generalised across test tasks.
These findings have important implications for word learning studies that compare memory between two test points. This research also emphasises the key role that testing can play in learning new vocabulary from storybooks in educational settings.

Further information about the BAAL Vocab SIG can be found here: https://baalvocabsig.wordpress.com